Proving “the show will go on,” the Cardinal Arts University Performing Arts program opened the 2020-21 season with a unique four-show run of Twelfth Night October 1-4. Performances were held in Heritage Park on the Stritch campus, 6801 N. Yates Rd., Fox Point.

“We are all learning how to create a performance that responds to our current situation,” said Mark Boergers, chair of Stritch’s Performing Arts department and director of Twelfth Night, said before the debut. “Our cast and crew have really embraced a team approach and are enjoying the process of presenting this ambitious performance to our patrons.

“One challenge is that we have nowhere to turn to learn how to do this,” said Boergers. “The students are experiencing problem-solving and discovering innovative solutions in the spirit of their artistic training. They have to be ready for any number of scenarios.”

“The students are excited to be together and recognize that they may have to sacrifice some things to have the opportunity to be together,” said Boergers. “They feel privileged to be able to do the work right now and believe that any art is better than no art. In addition to creative problem solving, the performers must be accountable to each other and have adopted a ‘we are in this together’ approach.”

A performance will be recorded and made available on Stritch.edu later in October. Learn more about the performances in this story, written by Stritch student Emily Czaplewski. 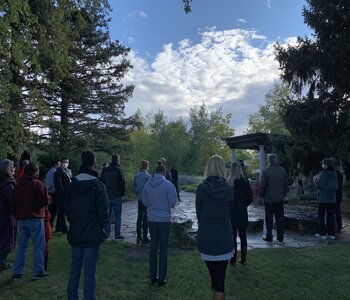 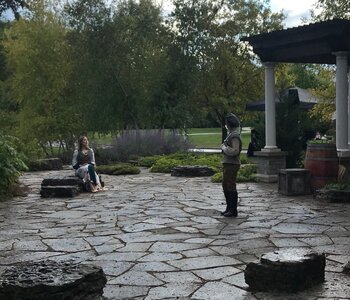 Performances were held outdoors in Heritage Park on the Stritch campus. 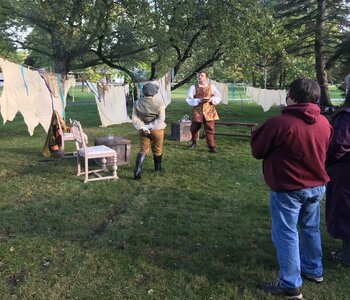 The play was performed "promenade style" on all sides of the audience.

Actors wore face coverings and performed in a socially-distanced manner. 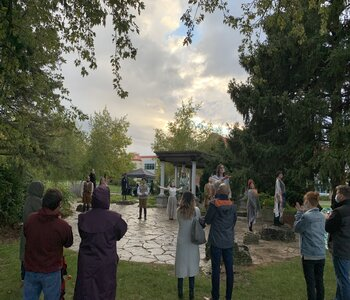 "In addition to creative problem solving, the performers must be accountable to each other and have adopted a 'we are in this together' approach," said Mark Boergers, chair of Stritch's Performing Arts department and director of Twelfth Night.

Photos from the October 1, 2020, performance of Twelfth Night, presented by Stritch Performing Arts.