During our 85th anniversary year, we will be sharing images that represent Stritch's rich history. Check back each week to see the latest!

Do you have a photo from your time at Stritch? Email it to communications@stritch.edu to be featured in the gallery! 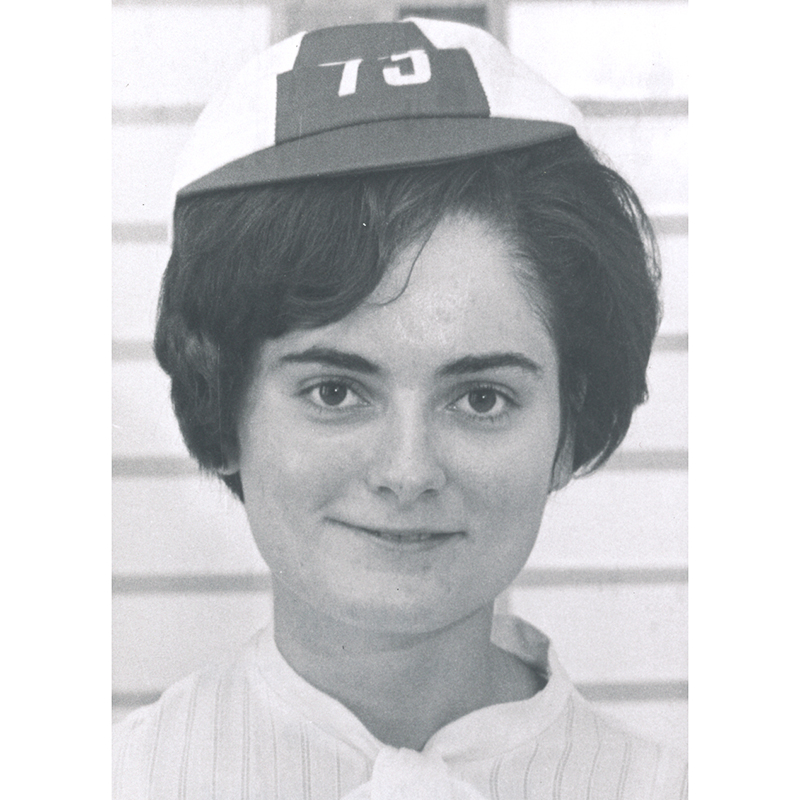 Like many other colleges and universities at the time, Cardinal Stritch College issued beanies to freshmen students each year. The front of the red and white beanies were marked with the graduation year. Tradition required freshmen to wear their beanies whenever they were out and about on campus, identifying them as their newest students and exposing them to a bit of ribbing and fun while bonding them to their fellow classmates. *Pictured: Teresa Terp (B.A. Foreign Language, '73) 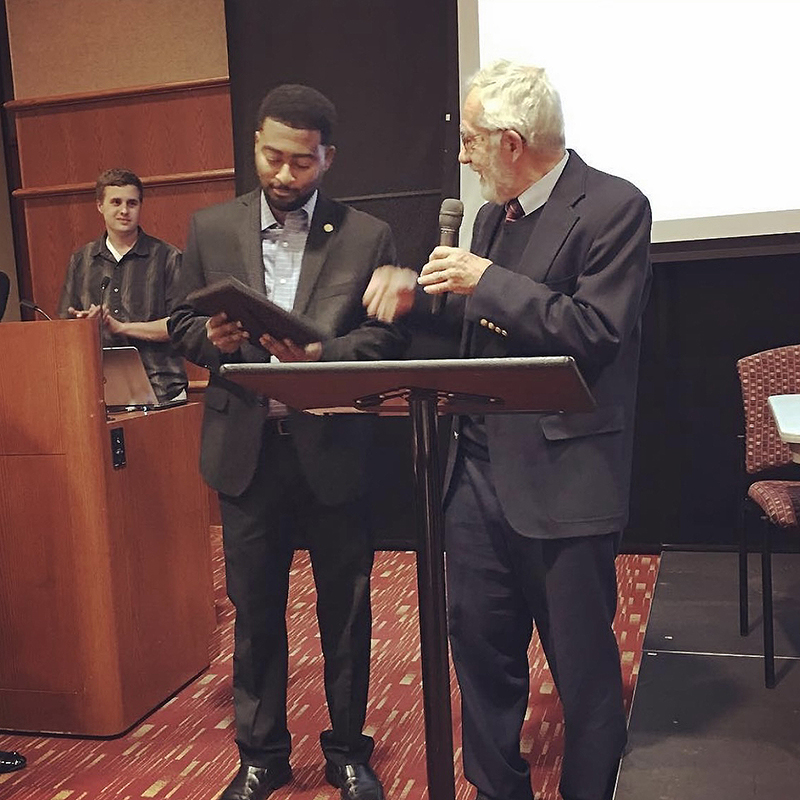 “I have so many wonderful and fond memories during my time at Stritch, but one memory that stands out is the day I was presented with my Urban Ministry Certificate from Dr. Dan Di Domizio through Stritch’s Brother Booker Ashe Urban Ministry Program in 2016.” *Photo submitted by Byron Marshall, Jr. (A.S. Business, ’15)

In 1971, Stritch adopted the Red Devils as their new team name, partly to attract more men to enroll. Newly coed, the College admitted the first men as students in 1970 and the administration expanded athletics to include both men’s basketball and bowling. Prior to the 1970s, Stritch did not have a formal team name, but students and teams were referred to as Cardinalities. 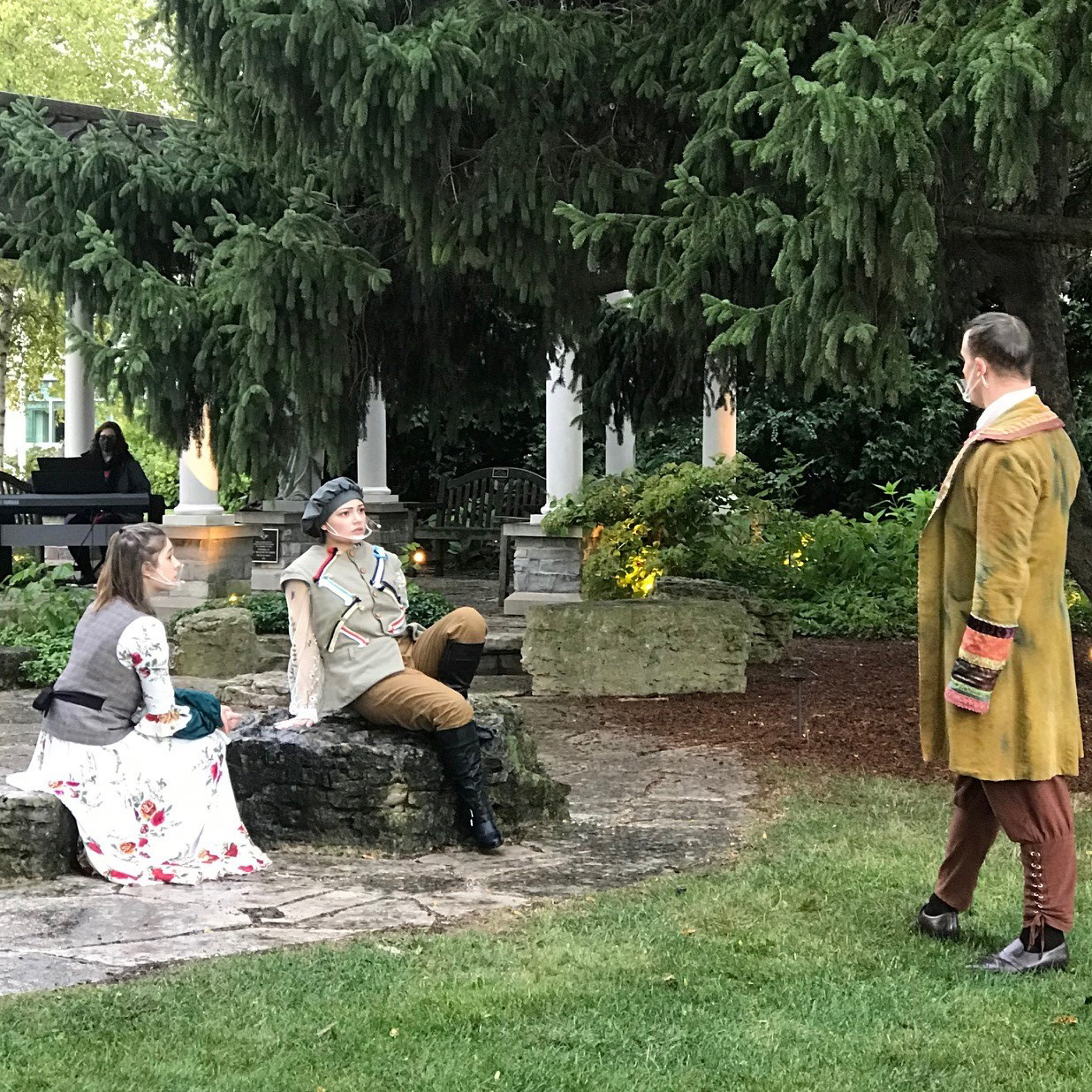 Dedicated in 2008 to honor the Sisters of St. Francis of Assisi, Heritage Park is a peaceful space on the east side of campus. In 2020, the park was transformed into a stage for Stritch's first promenade-style theater production, "Twelfth Night." Rather than cancel the Performing Arts season due to COVID-19 restrictions, student-actors safely performed scenes for a limited audience throughout the 4,000-square foot space. 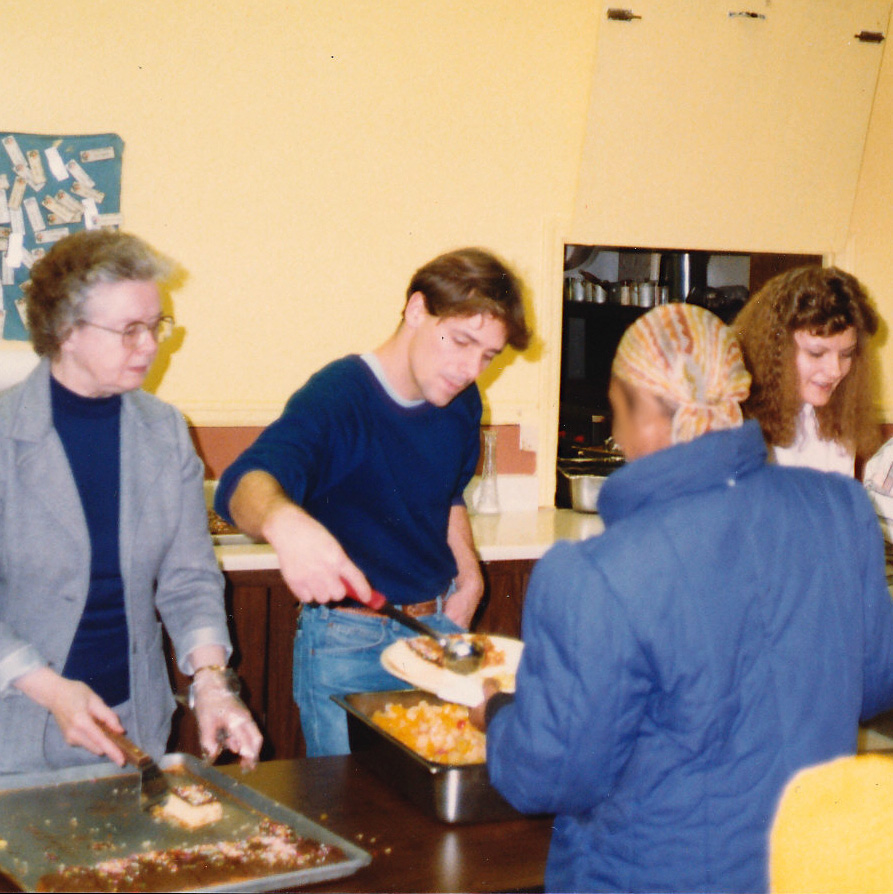 In 1977, under the leadership of Stritch’s first campus minister Sister Doris Pehowski, OSF, Stritch students, faculty and staff began volunteering to provide and serve one meal per month to Milwaukee’s neediest residents at two parish meal programs -- St. Benedict the Moor and St. Gall’s. At that time, Stritch was the only college group committed to be a monthly sponsor of the St. Ben’s Meal Program. Generations of Stritch students have volunteered at the sites, and today’s students carry on that legacy each month at St. Ben’s. 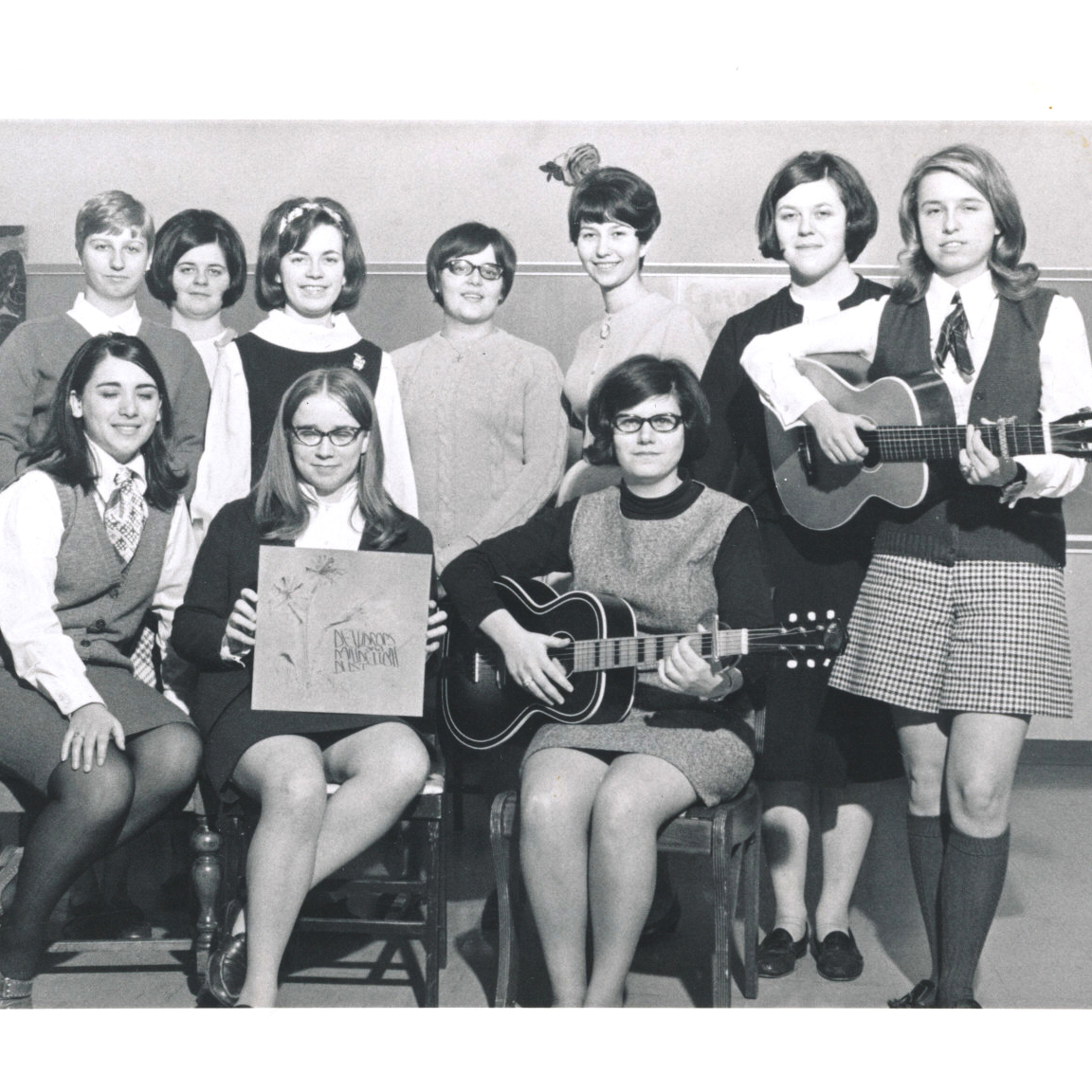 In 1969, Stritch students wrote, produced and recorded their own album. “Dew Drops and Dandelion Dust” featured 15 folk-style numbers including the songs “Silhouette of a Women,” “Dew Drops” and “At Little Moments.” According to the album liner notes, songs were about “life as seen and lived by the students at Cardinal Stritch.” The students performed in Serra Hall and Boston Store, a downtown retailer. The album sold for $4.98, and all proceeds went to help buy a pool table for campus.

Listen to a sample from the album 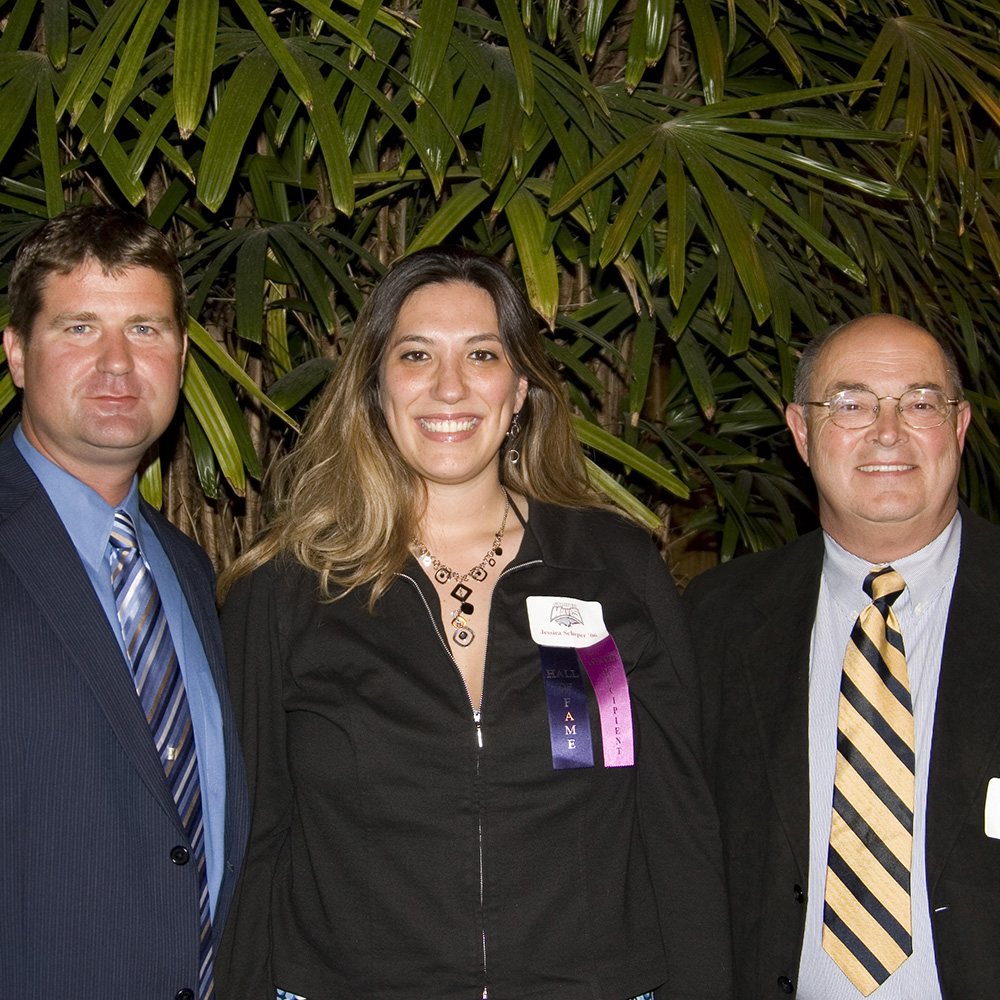 In 2001, Stritch established the Athletic Hall of Fame to honor former athletes, coaches and administrators who have made significant contributions to the University. The inaugural class of inductees included former student-athletes Peter Loyda, ’90, and Jennifer Wittmann, ’93, as well as Dr. William F. Stier, Jr. (former coach and director of athletics). Then-president Sister Mary Lea Schneider, OSF, was a champion for the initiative and presided over the induction ceremony. Pictured: John Pfaffl, ’13; Jessica Scheper, ’03, ’06, and the late Rich Panella, ’12(H) at the 2007 Athletic Hall of Fame Induction Ceremony. 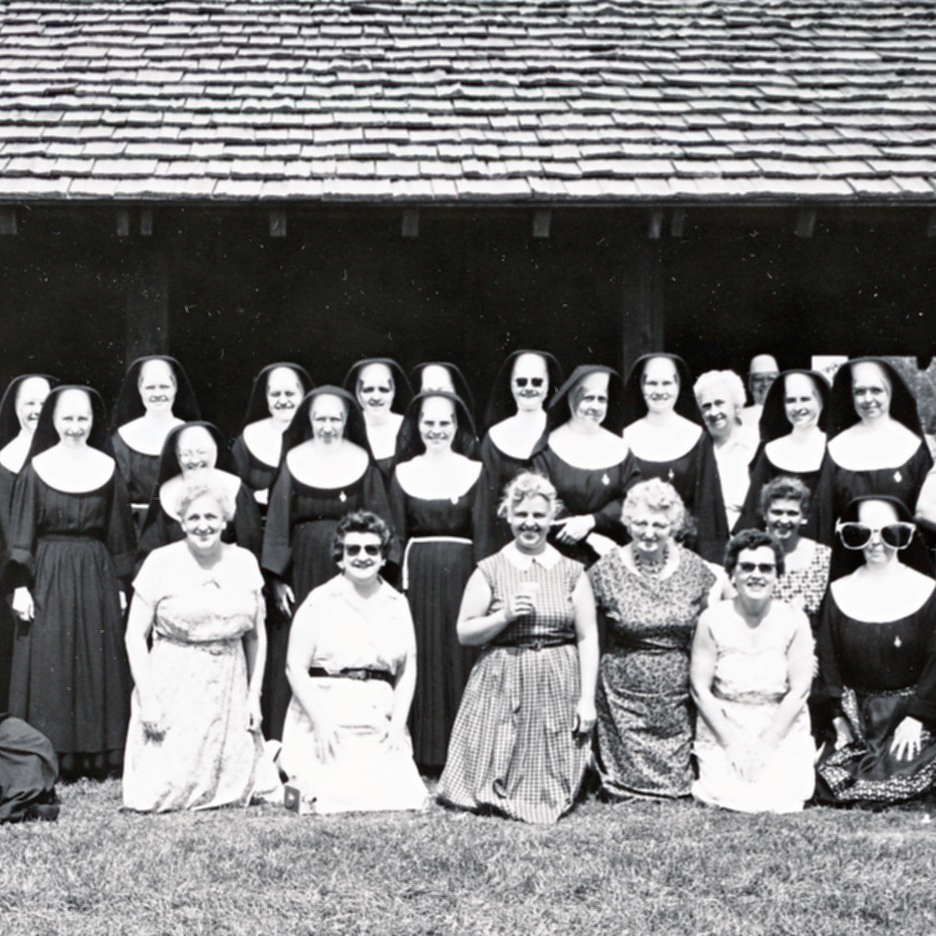 In 1947, a group of women dedicated to promoting the mission of the College formally organized as the Mother’s Club, although most of them did not have daughters attending Stritch. For more than 44 years, they sponsored fundraising projects, raising $126,638 by the time they disbanded in 1991. Funds paid for many things, including the stained glass panels in today’s Leadership Commons, the stained glass “Saint Clare and the Saracens” window in Duns Scotus Hall, several cars and the Bösendorfer concert grand piano. 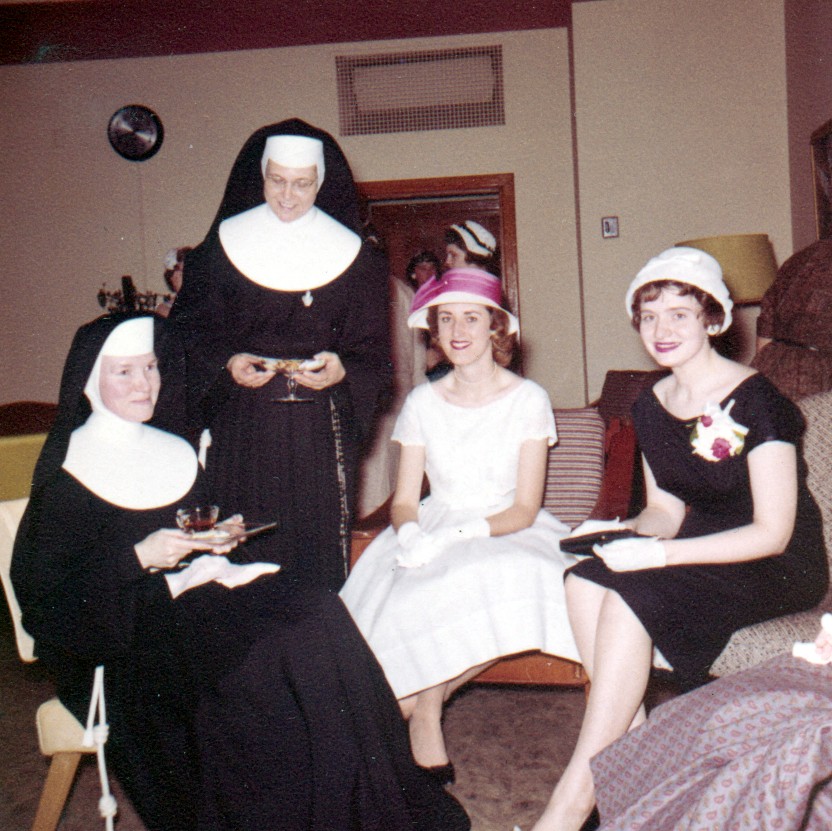 Until 1970, Stritch was an all-women’s college and the curriculum and extracurriculars both reinforced and challenged women’s traditional roles as wife, mother and helpmate. To develop refined women, Stritch held teas and formal dances and encouraged students to take home economics. However, Stritch also allowed women to engage in activities outside the traditional female roles and provided leadership opportunities. Stritch students also played athletics, something that was frowned upon during that era. The Sisters stood as role models and examples of women leading rewarding lives outside of marriage. 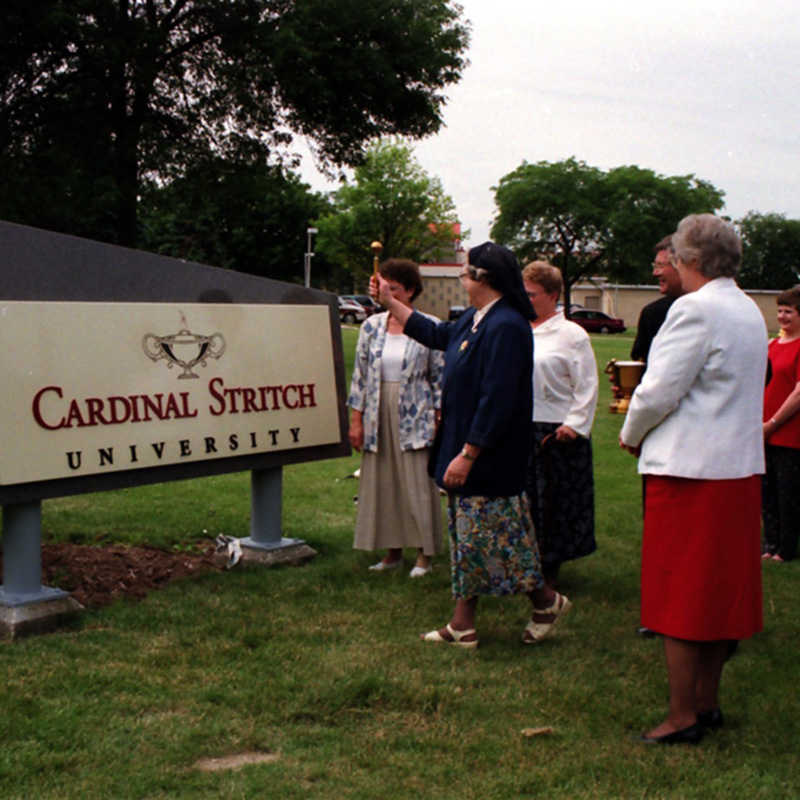 Cardinal Stritch College moved to University status in 1997, changing its name to Cardinal Stritch University and its structure to include four academic colleges. The Board of Trustees signed the official proclamation, emphasizing Stritch’s size, its comprehensive academic offerings, heterogenous student body, and plans to unveil its first doctoral degree program as reasons for the change. With the new name came a new logo and seal as well as new signage for campus. 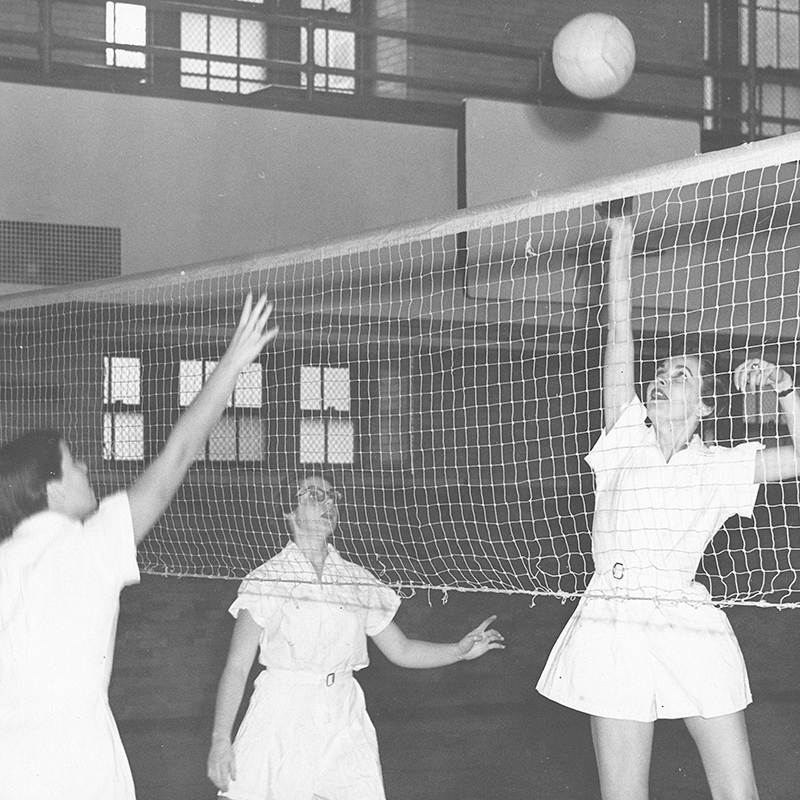 In the 1940s and 1950s, sports were among the many extracurricular activities Stritch offered its all-female student body. Some participated in recreational athletics, playing baseball and other sports with girls from neighboring St. Mary’s Academy High School. Other Stritch women played basketball and other varsity-level sports. Stritch’s competitive teams played other Catholic colleges in the city, Milwaukee State Teachers College (now University of Wisconsin-Milwaukee), and Wisconsin State College-Whitewater (now University of Wisconsin-Whitewater). 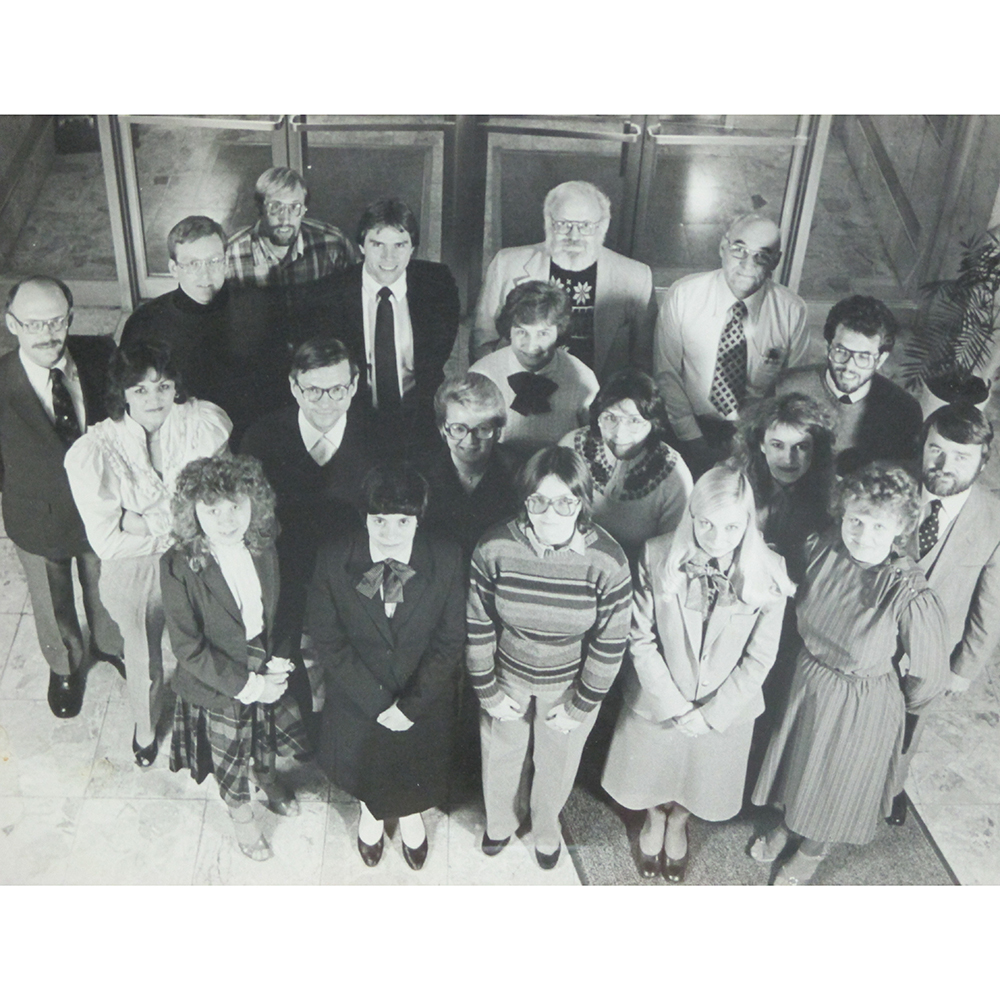 Stritch has a history of programming for non-traditional students. In the 1950s and 1960s, art programs catered to adult learners. In 1976, Stritch opened its venture program for working adults to earn undergraduate degrees during the day. In 1982, the Program in Management for Adults provided opportunities for adults to take evening, accelerated classes to earn their degrees. As the first program of its kind in Wisconsin, PMA experienced tremendous growth for the next 30 years and expanded to include graduate degrees and off-campus sites. The very first Mile of Art Faire in 1977 attracted about 3,000 people who strolled along cam¬pus roadways perusing the work of artists chosen through a juried process. Originally started by former Art Department Chair and internationally known artist Sister Thomasita Fessler, OSF, and the Friends of Studio San Damiano, the Mile of Art raised funds for the department and the studio and provided a summertime family event featuring artists from throughout the Midwest, including numerous Stritch alumni. Stritch hosted its final fair in 2003. 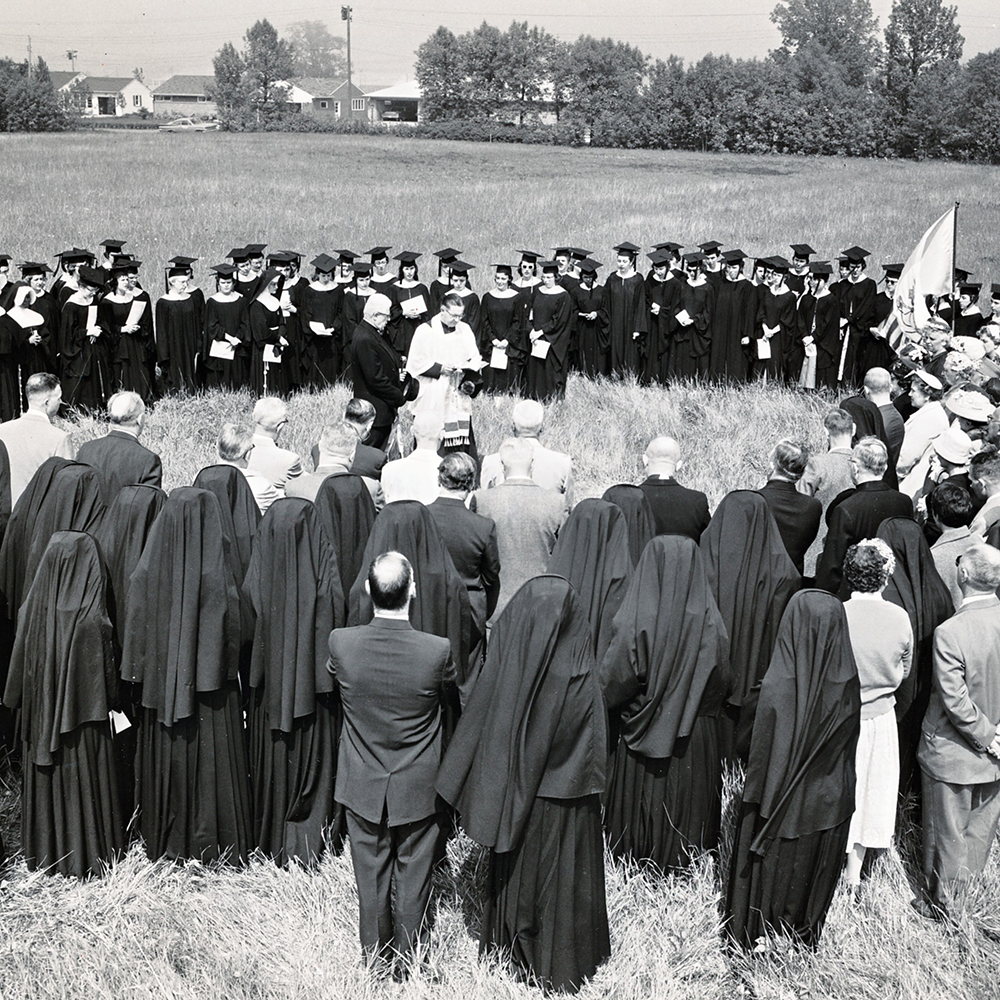 Stritch dedicated the St. Francis of Assisi Chapel on Oct. 4, 2011 (the feast day of its namesake). The Most Rev. Jerome Listecki, archbishop of Milwaukee, presided over the Mass. Prior to 2011, the chapel was located in Cardinal Lounge on the first floor of Bonaventure Hall (2007-2011) and in the basement of Serra Hall (1962-2007). The spaces, however, did not meet the capacity needs and students lobbied for the construction of a new chapel. The chapel can accommodate four times the capacity of the former space. 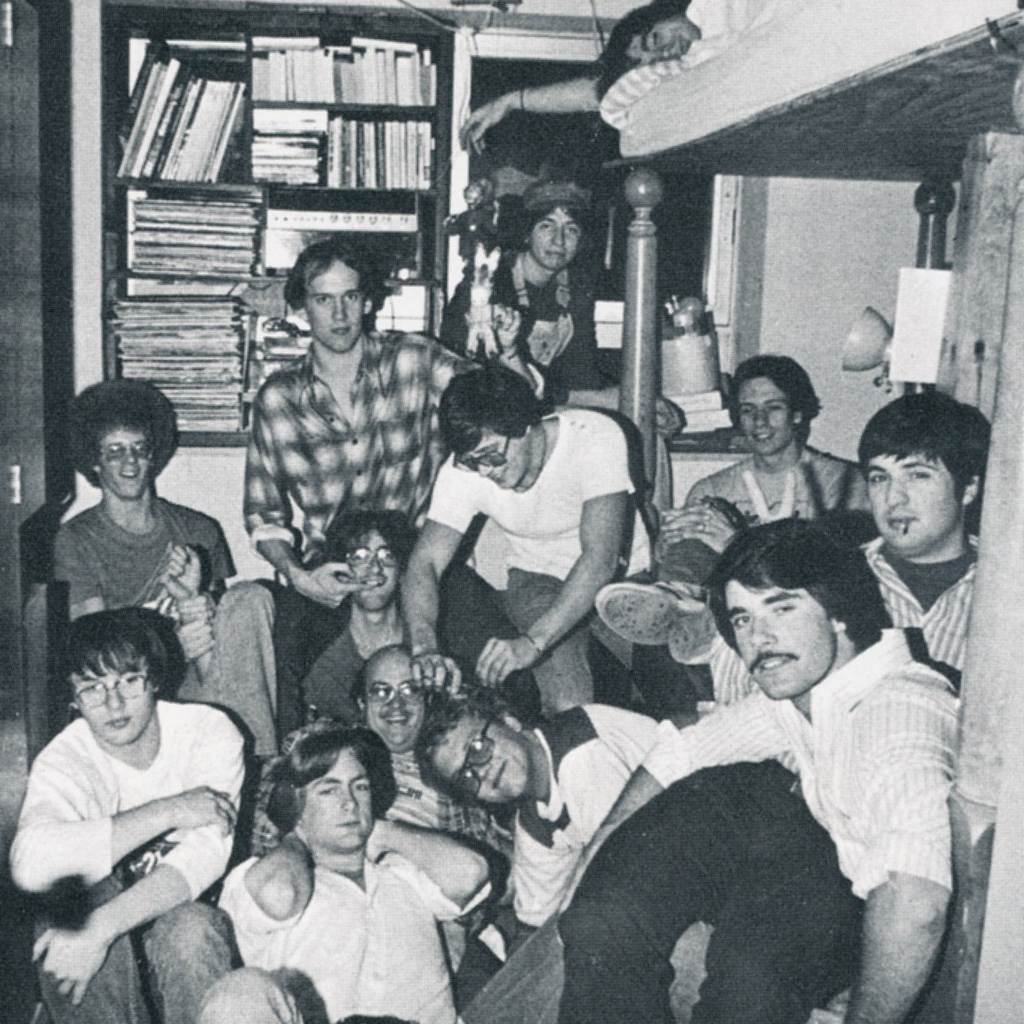 Cardinal Stritch University was founded as a women’s college, and the Sisters believed this allowed the school to develop strong and refined women. In the 1960s, however, Stritch administrators began to see declining enrollment as female students decided to attend coed colleges. As a result, Stritch admitted its first male students in the fall of 1970. Some students and faculty worried that the newly admitted men would dominate campus life, but Stritch had a strong culture of women’s leadership. Throughout the 1970s, most clubs and organizations were led by women, and female students continued to be leaders in the classroom. On July 17, 1937, Wisconsin Secretary of State Theodore Dammann signed the official Articles of Incorporation establishing St. Clare College (later named Cardinal Stritch University) as a four-year degree-granting institution. Founded by the Sisters of St. Francis of Assisi as a teacher preparation college for the Sisters, St. Clare College granted its first baccalaureate degrees to four students. Mother Bartholomew Frederick, OSF, served as the inaugural president of the college which shared a campus with St. Mary’s Academy on the south side of Milwaukee.